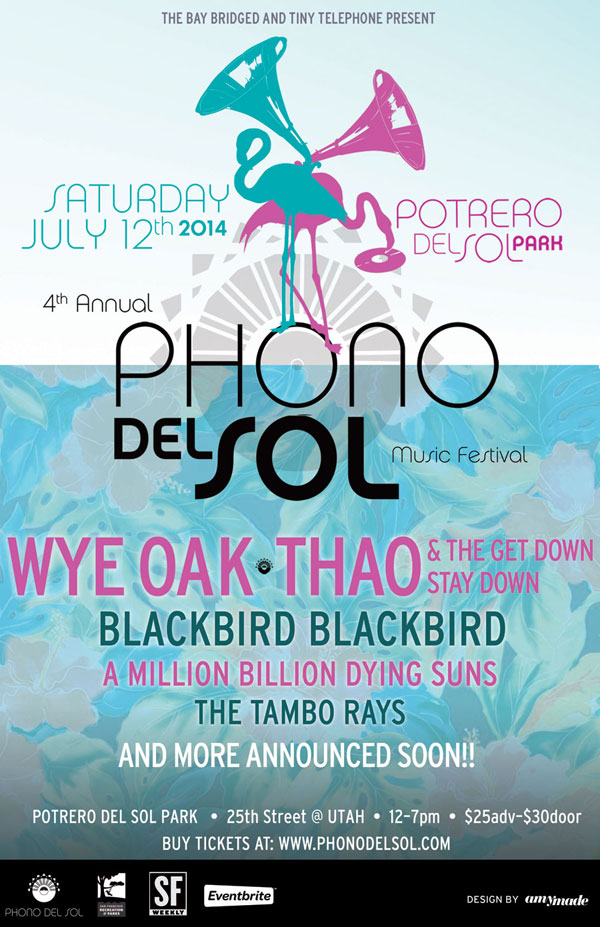 Phono Del Sol is a festival I present with the excellent Bay Bridged:

“The Bay Bridged is proud to announce five great bands performing at the Phono del Sol Music Festival on July 12, 2014 at Potrero del Sol Park. The fourth annual festival celebrating the best of independent music will be co-headlined by Baltimore’s Wye Oak in their exclusive San Francisco Bay Area performance in support of their acclaimed new album Shriek. Also at the top of the bill are SF favorites Thao & The Get Down Stay Down, hands down one of the best live bands around.

They’ll be joined by eight other bands at the festival, three of which we’re announcing today. SF’s Blackbird Blackbird will be bringing anthemic electronic pop to Phono, fresh off the June release of Tangerine Sky. There will also be performances by SF/LA transcendental rock band A Million Billion Dying Suns and local rock and roll party-starters The Tambo Rays. The five remaining Phono del Sol 2014 bands will be announced soon.

General Admission and VIP tickets to Phono del Sol are on sale right now at PhonoDelSol.com. Individual General Admission tickets are $25 each, with a limited number of discount six-packs (save $5 per ticket!) also available.”

I’m taking most of the year off to produce records and build the new Tiny Telephone Oakland. I will be playing 4 Bay Area shows this summer. They are all pretty special.