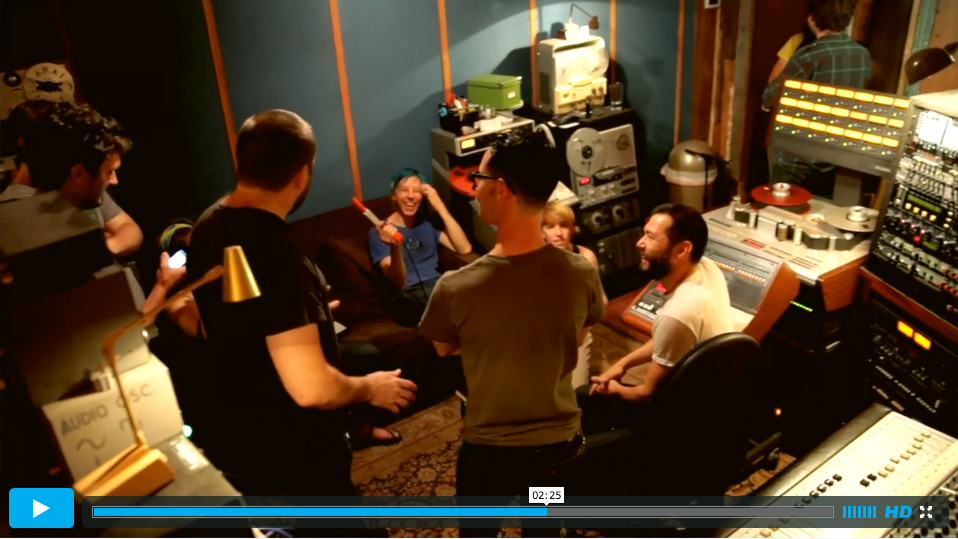 A few notes from me:
“I wanted to make a performance video that was more like a documentary of recording at Tiny Telephone. Jake kept everything naturalistic and loose. I love the musicians and engineers who work at the studio and just wanted show them at work, doing the heavy lifting on records, obsessing about their craft, eating delicious tacos, and having a blast doing it.”

And from Jake Wachtel, the amazing director:
“JV recorded Dagger Beach at Tiny Telephone studios in SF, which he also runs. This is just an awesome, inspiring place to make music (I just had the pleasure of mixing my own album there!); its chock full of incredibly beautiful analog gear and there’s a palpable sense of family among all the engineers who work there. So the idea of the music video was to try to capture the vibe of this specific place and family, and also to give a little glimpse into all the crazy behind the scenes work that goes into making a record—hooking innumerable cables into the patch bay, fixing the synth right before the session started, swabbing the tape machine with a q-tip, trekking out into the mission district to refuel with abundant burritos, hanging out in the control room and dissecting the philosophical underpinnings of Karate Kid (see if you can catch drummer Jason Slota’s wax-on moment). All of these tactile, physical moments from the recording session are there when you listen to a piece of music, folded into the fabric of the recording. We wanted to give these moments their due.”